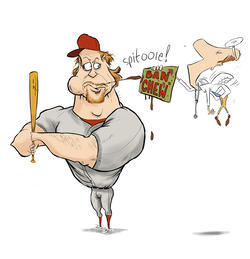 Major league baseball players are known to commonly chew tobacco products during practice and games. With 75% of oral cancers being caused by the use of smokeless tobacco, the ADA is encouraging major league stadiums to go tobacco free in the year 2012.

Although minor leagues have banned chewing tobacco since 1993, a reported 30% of major league players still chew. The first steps to decreasing the mortality rate to oral cancer is education. Through the efforts of the ADA, health care professionals hope to bring awareness to major league baseball players.

Visit our sources for more information: